The value of a chair to the governability of a country
8520
post-template-default,single,single-post,postid-8520,single-format-standard,theme-bridge,bridge-core-2.2.9,woocommerce-no-js,ajax_fade,page_not_loaded,,qode_grid_1300,vss_responsive_adv,vss_width_768,footer_responsive_adv,hide_top_bar_on_mobile_header,qode-content-sidebar-responsive,columns-3,qode-product-single-tabs-on-bottom,qode-theme-ver-21.6,qode-theme-bridge,wpb-js-composer js-comp-ver-5.0.1,vc_responsive

The value of a chair to the governability of a country 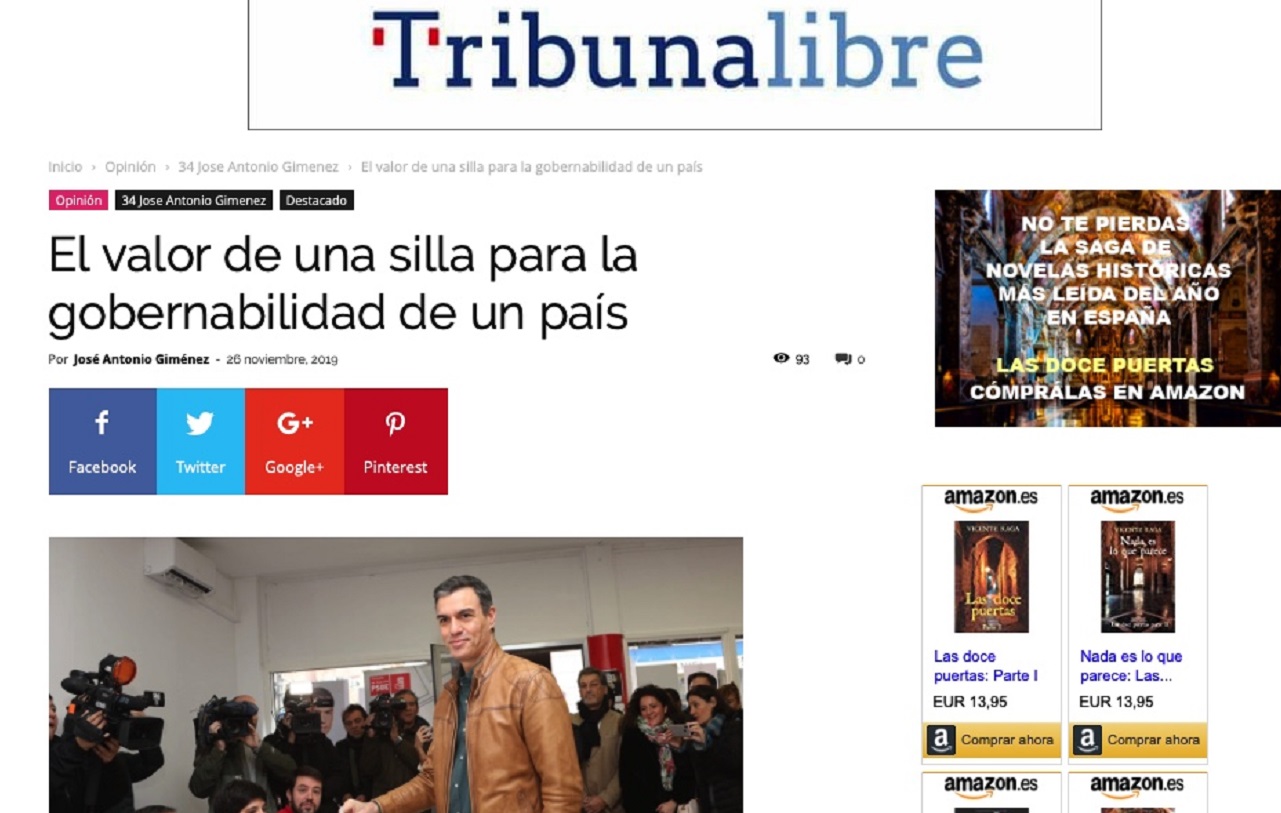 Posted at 09:49h in communication, Uncategorized by jagf

There is a proverb in Spanish that says that “no importa tanto que hay sobre la mesa, si no lo que hay sobre la silla” and it seems appropriate to use it here now that chairs are more important than desks to the governability of Spain. And it is important, a lot, who will be, and representing what, sat on the chair. It will not be that important what is placed on the table, because what they say in politics, unluckily is never fulfilled nowadays. Or even worse, sometimes what it is told is in fact what was placed on the table.

These days we are going to be overwhelmed by the consultation to the bases of the main parties involved in the negotiation to the investiture of Pedro Sánchez as the president of the government in Spain. Curiously enough, it is intended to draw attention away with the members’ of PSOE and Unidas Podemos consultation about the enthusiasm which causes the pact between these two parties from what it really matters; what this pact presupposes and the price of the support of ERC to Sánchez, If this support finally takes place.

The first diversionary tactic is found in the question asked to the members of PSOE, which are based on the ten programmatic points that both leaders signed in less than 24 hours from the electoral setback. These are so general and not developed points that would even apply even for a PP voter. In fact, the key to a pact it is not there, it is not an electoral programme but the distribution of power, of attributions and ministries between both parties.

If what is more important in a question is avoided and what is obvious is consulted, the question loses its sense, except from that of saving appearances. That is why it is not surprising that 92% of PSOE bases support the coalition with Podemos in a consultation with 63% of participation. What is very surprising indeed is the fact that no socialist has screamed the blue murder, being this consultation considered for the first time binding.

In fact, the only precedent which exists about a similar consultation was in 2016, when Pedro Sánchez looked for the endorsement to the bases of the investiture pact with Ciudadanos. It is known that, at that moment, the consultation was not binding, although the result was also favourable.

The second diversionary tactic is to justify with dialogue the creation of party talks to solve the so-called “Catalan problem”. PSOE, which is capable of bringing back the death to give electoral credit, decided to exhume the Rapporteur buried in November, waiting for the move to let him redirect the attention of the media and the public opinion.

What we are not told is that this party talks- in plural- has nothing to do with the representation in the Catalan parliament – chosen democratically by the citizens which live there- with no representation in the Congress of Deputies, in which the weight of each group is proportional to all the citizens represented, and the representatives of the Catalan independence reach with some difficulties an insignificant 7%. This party talks, in fact, what looks for is that each party has a seat and that all have the same worth.

Humiliation is served, but Pedro Sánchez has already accepted covering his nose and looking to other side with euphemism to the style of Enrique de Borbón; “Paris is well worth a mass”. A protestant with decided to convert to Catholicism in order to govern. The popular wisdom has more simple expressions to understand, such as the one in Spanish that says that “la voz que el culo emite, no hay arrastre de silla que la evite”.

The worse thing is not the attitude of an opportunist also known as statist, but what we are told little by little has nothing to do with reality – read the question asked in the bases-. Or after the silence of men and the support of the socialist bases to Sánchez, black and white, Catalan republicans have increased prices.  Now the main negotiator will be one of those people that boosted the challenge to the State in October 2017, and the second ex-member of the politicians’ list Oriol Junqueras, Josep María Jove. They make clear that the negotiation is not about parties but governments, from peer to peer, face to face. There lies the importance of a chair to the governability of a country.

Next move, ERC enters the judiciary. That is why the catalan judiciary has been created, there is only a previous step; the creation of the Euskadi justice council. It was not going to be only about Catalonia.

CODA: So far, ERC had deviated with a negative question to its bases: are you in favour of rejecting the investiture of Pedro Sánchez if there is no previously pact to solve the political conflict with the State through a negotiation table?

Analyst of political marketing in Sanserif.es