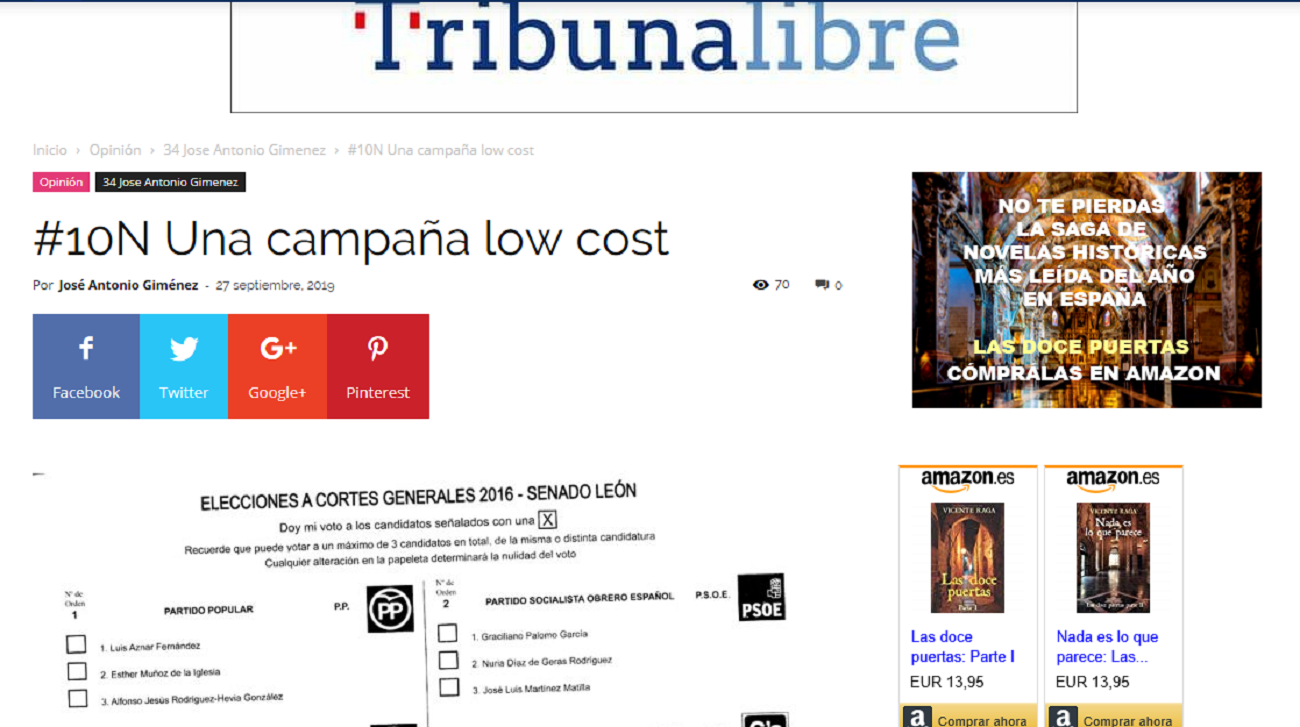 Posted at 11:17h in communication, Uncategorized by jagf

It seems that the Presidential chair contributes to a downward trend nowadays; four elections in four years has left parties’ finances at its lowest levels, sometimes even empty, and now they promote austerity. Or, in other words, they promote that members of the party bear the money and work, wreaking the elections’ luck on electoral debates, which are included in the prize for being head of the list. Never was a government presidency more within reach for any politician.

In light of this situation, one does not know if the campaign to not receive election propaganda is an independent proposal, or an initiative thought by the political parties themselves; so as not to mortgage their own viability; and also the viability of the rest of Spanish people. Perhaps, as a consequence, the Executive works in order to accelerate the payment date of the nearly 40 million public euros in grants that belong to the different political groups due to their results on the 28th of April. It is not altruism; they need it, including the party that governs.

Whatever they may say, all parties have financial problems. However, even knowing this, they have not thought about the risk of technical bankruptcy they will have to confront in the event of electoral breakdown or repetition of the results. In fact, there is a sense that the insistence of a new electoral process is more justified by the necessity of obtaining additional public funds to their subsistence, rather than in the general Spanish people interests. If results are better, their public accounts are sorted out; although the opposite might happen too.

Another circumstance to take into account is that banking, which has always been predisposed to facilitate credit to the politicians, is now more reluctant to cover their expenses, no matter that the electoral campaign costs less and takes half the general time. The lack of predisposition may have its explanation in the high debt ratio of most of the political parties, with special mention to Populares, Socialistas and nationalist parties. After the banking concentration, more than half of the debt (52%) is in the hands of two Spanish banks: CaixaBank and Banco Santander. That explains their lack of predisposition to increase their default accounts.

In particular, the leaders of the two-party system – PP and PSOE – accumulate 60% of the financial obligations, while on the 31st of December last year, the new political parties, such as Ciudadanos, Vox or Podemos, lack of outstanding debts. Perhaps this last one a bit handicapped by Izquierda Unida’s debts, its electoral associate. However, that oasis of economic peace was nine months ago. Now, accounts are overdrawn in all parties. Even Podemos’ ones, no matter how they defend themselves with their funding via microcredits covered by its militants.

Whatever happens on the 10th of November, what is sure is that the official campaign will last 8 days plus 37 days of pre-campaign, which will reduce the investment in events and public acts, while the parties are already on campaign several weeks using the plenary of the Congress and its adjoining rooms to show their political positions, instead of focusing in the parliamentary activity, under the derisory excuse of being a caretaker parliament, except for the full salary they receive. That means saving for the parties and their campaigns but has costs for the contributor.

Anyway, the demanded and promoted moderation in the campaign has not that much to do with the temporal reductions of it, not even the assumed break that would generate the elimination of the mail campaign. Actually, the saving will be arranged through the use of mass media- preferably from the public sector- to convey their messages. And, in this scenario, to control the national channel and the regional ones will be of special importance.

In fact, the surprising offer done by the managers of the public television to the leading parties, almost 50 days before the elections, is an attempt to control the media’s agenda for the electoral campaign, with two debates and 3 face-to-face debates, is a clear example of what this campaign will be focused on and the politicisation of the public sphere.

It is puzzling that public channels decide the people that debate together, without abiding the objective data- the same used in the previous elections- to decide the opponents selection. And it is also surprising that the proposed face-to-face obey a supposed informative interest, which corresponds with the caretaker government’s interest. Isn’t there, then, an intention to avoid a dialectical struggle between Albert Rivera (Cs) and Pedro Sánchez (PSOE)? Or is it in the decision to oppose Ciudadanos leader’s speech with Pablo Casado’s one (PP), alleged partners of a future Government?

The agenda defined by the public channels- if it becomes true- will practically leave private channels with no options and, at the same time, tries to offload the electoral weight in the television presence of politicians, dismantling the normal functioning of a campaign. Meetings and acts in the streets will have to give in to audio-visual pressure. And social networks will take over when leaders will not be live.

We will again experience the war to win followers in the social network- and the cost of it – while the traditional voter will wonder if this new method of doing campaign is provoked by the economic austerity, or the neglect of citizens’ opinion. Political parties have forgotten that almost a quarter of Spanish people- people from 60 years old, around 25% of the population- live apart from social networks and other 22,59%- those between 45 to 59 years old show no special interest in the main social networks.

The rate of vote conversion of social networks is low and means an elevated economic investment compared to the traditional methods of communication- posters, display graphic services…- It seems that due to the lack of credit, political parties will again hoist the audience wild card, not to attend sandwiches’ and musical shows’ meetings- we are losing traditions – but to work free from home spreading the pre-elaborate word of the agitprop departments. There will be legions of zombies and information rebounders with pseudonyms and emoticons which disrepute social networks, with the vain hope of future compensations, not in the present. The traditional chair’s game.

Then, where are the savings of this “low cost” campaign? They make us believe that the economic austerity of the political parties has nothing to do with their overdrawn finances but in their intention to not be a burden on public finances. To start with, 140 million euros costs the convocation of elections and the basic infrastructure. It is a pity that this realisation was not on the past 23rd of September, the date when the low cost Spanish Parliament was disolved.