Treviño or the importance of being in the background in politics
8545
post-template-default,single,single-post,postid-8545,single-format-standard,theme-bridge,bridge-core-2.2.9,woocommerce-no-js,ajax_fade,page_not_loaded,,qode_grid_1300,vss_responsive_adv,vss_width_768,footer_responsive_adv,hide_top_bar_on_mobile_header,qode-content-sidebar-responsive,columns-3,qode-product-single-tabs-on-bottom,qode-theme-ver-21.6,qode-theme-bridge,wpb-js-composer js-comp-ver-5.0.1,vc_responsive

Treviño or the importance of being in the background in politics 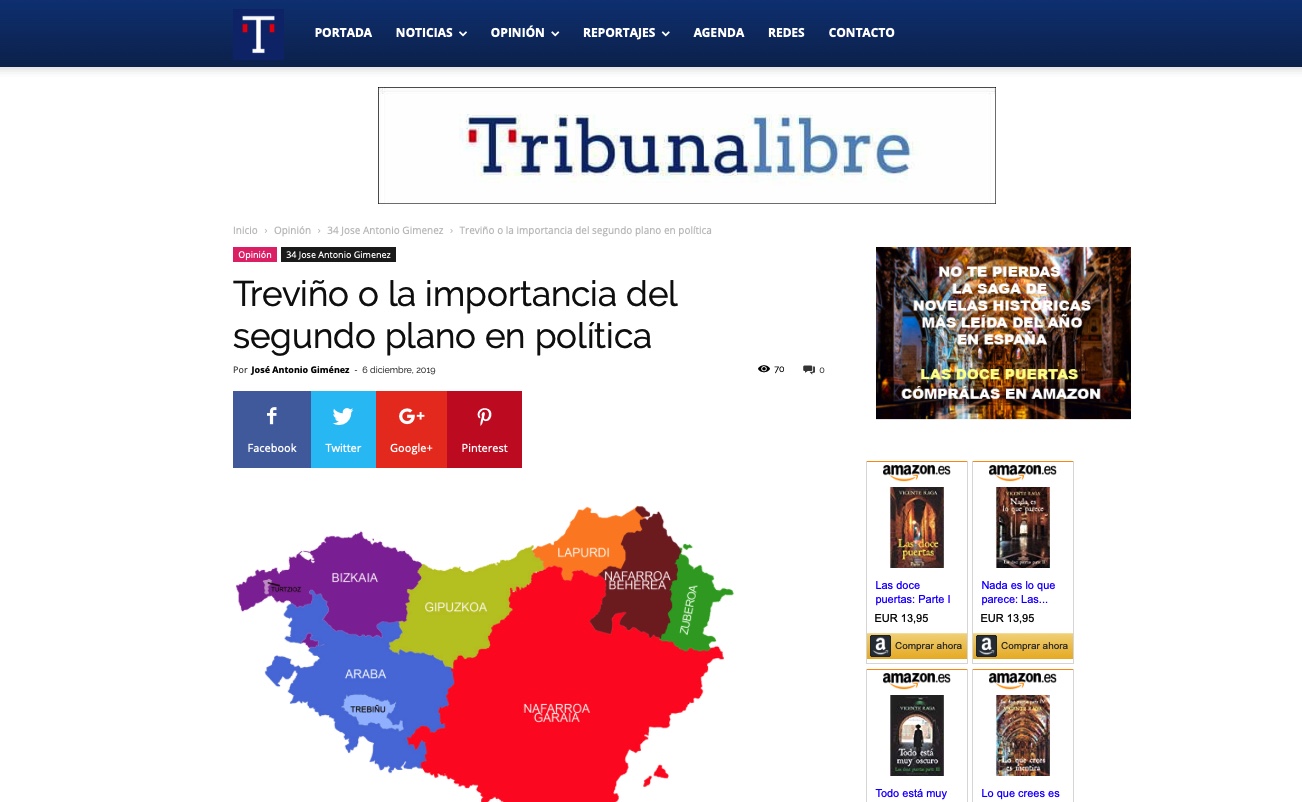 Posted at 13:16h in communication, Uncategorized by jagf

Film world presents us what the director want us to see. To do so, there are myriads of technical elements which are capable of conveying emotions, making people sympathetic with the characters and their story… but, in most cases, these elements can also be a distraction.

That is what happens with the negotiation between PSOE and ERC for the investiture; our attention is constantly attracted by different methods to the party talks, governments or who knows which euphemism it will be called. Actually, the authentic action is taking place in the background. I would go as far as to say that it is taking place some kilometres away from the meeting headquarter among these parties.

If we disobey the director and stare at the background, we find the discrete negotiation of PNV and Bildu with the Socialist Party of Euskadi-Euskadiko Ezkerra (PSE-EE) regarding the new autonomy statute of the Basque country. This is a matter of vital importance in the national politics due to the fact that the Basque nationalism has become the test bed of proves of the independent politics. They are the ones that are leading the way since they obtained the economic agreement.

They already did it with the Ibarretxe plan, which met a harsh reality in the Deputies Congress, which is also the reality of the representation of the independence in Spain, even if PNV and ERC do not want to accept it, among others. This dead end was closed then for Catalans, hence the nonsense of 1-0. An attempt to prove the State’s resistance with a direct hit to our democracy’s governing principles.

Currently, while some play the game of the chairs, resolving who sits and what they represent to the negotiation for the future of our country, others ensure black and white the principles to base the union among PSOE, Unidas Podemos and ERC, with the endorsement of Basque nationalists, which constitutes bilateralism and the right to decide, in other words, pave the way towards segregation.

Beyond ambiguous and empty statements which, by the way, are the perfect images of the poor learning comprehension and calculation shown by the PISA report in Spain. There is a much more worrying reality, either being out-of-plane or in the backgrounds, while the director of these series tries to keep us abreast of the main action, which is not that one.

And, in the backgrounds, the negotiation of the draft for the new Basque statute continues, which introduces, on the one hand, a differential status for an autonomy led by PNV which will significantly modify its relation with the State, that is to say, it establishes the acceptance of a bilateral relations’ system. This is something which could be translated as “dialogue table” in the dialectal game of the Catalan independence but which is, in fact, ignoring its representation in the Congress- less than the 7%- and what gave them the Catalan citizenship- less than 50%- not to become the voice of an autonomy but of a territory equally represented in a legitimate State. Face to face.

As if this were not enough, in the before mentioned draft it is outlined the recognition of the “right to decide”, or the possibility that other territories and cities can ask for their incorporation to Euskadi through a referendum. Curiously enough, the other request of Catalan independence, raised by ERC as a starting point to support the investiture of Pedro Sánchez.

The claim is focused in a particular case; the county of Treviño. This enclave situated geographically in Álava, belongs in fact to the province of Burgos (Castilla y León) and has been kept as Gaulish village from the imperialist hardships of the Basque nationalism since nowadays, when the electoral arithmetic offers the summation of a weak central government which needs support to the investiture of its particular left César, what is more, both municipalities located in this territory in the Ebro valley area- Treviño and La Puebla de Arganzón- depend both on nationalist mayors, one who joins PNV and the other EH Bildu.

It is a crack which confines a particular territory. That is the excuse. Actually, the aim is to disguise as institutional something which is not and adding it in the basic institutional norm in an autonomous community; its Statute which, furthermore, is integrated in the corpus of the State legal order. The excuse here is a historical claim of the Basque nationalism; the county of Treviño. But once the cat is let out of the bag, there’s no way back.

In the meanwhile, the shell game continues misleading the public eye, with meetings and more meetings, progresses and setbacks in the negotiations, premeditated anecdotes such as the mishap of Adriana Lastra, or emotional requests for forgiveness, such as the one by Agustín Zamarrón, to keep the spotlight on the director’s desire, although the action is actually in other part.

Close flat and cast to black.