The invisibility of micro-politics
8055
post-template-default,single,single-post,postid-8055,single-format-standard,theme-bridge,bridge-core-2.2.9,woocommerce-no-js,ajax_fade,page_not_loaded,,qode_grid_1300,vss_responsive_adv,vss_width_768,footer_responsive_adv,hide_top_bar_on_mobile_header,qode-content-sidebar-responsive,columns-3,qode-product-single-tabs-on-bottom,qode-theme-ver-21.6,qode-theme-bridge,wpb-js-composer js-comp-ver-5.0.1,vc_responsive

The invisibility of micro-politics 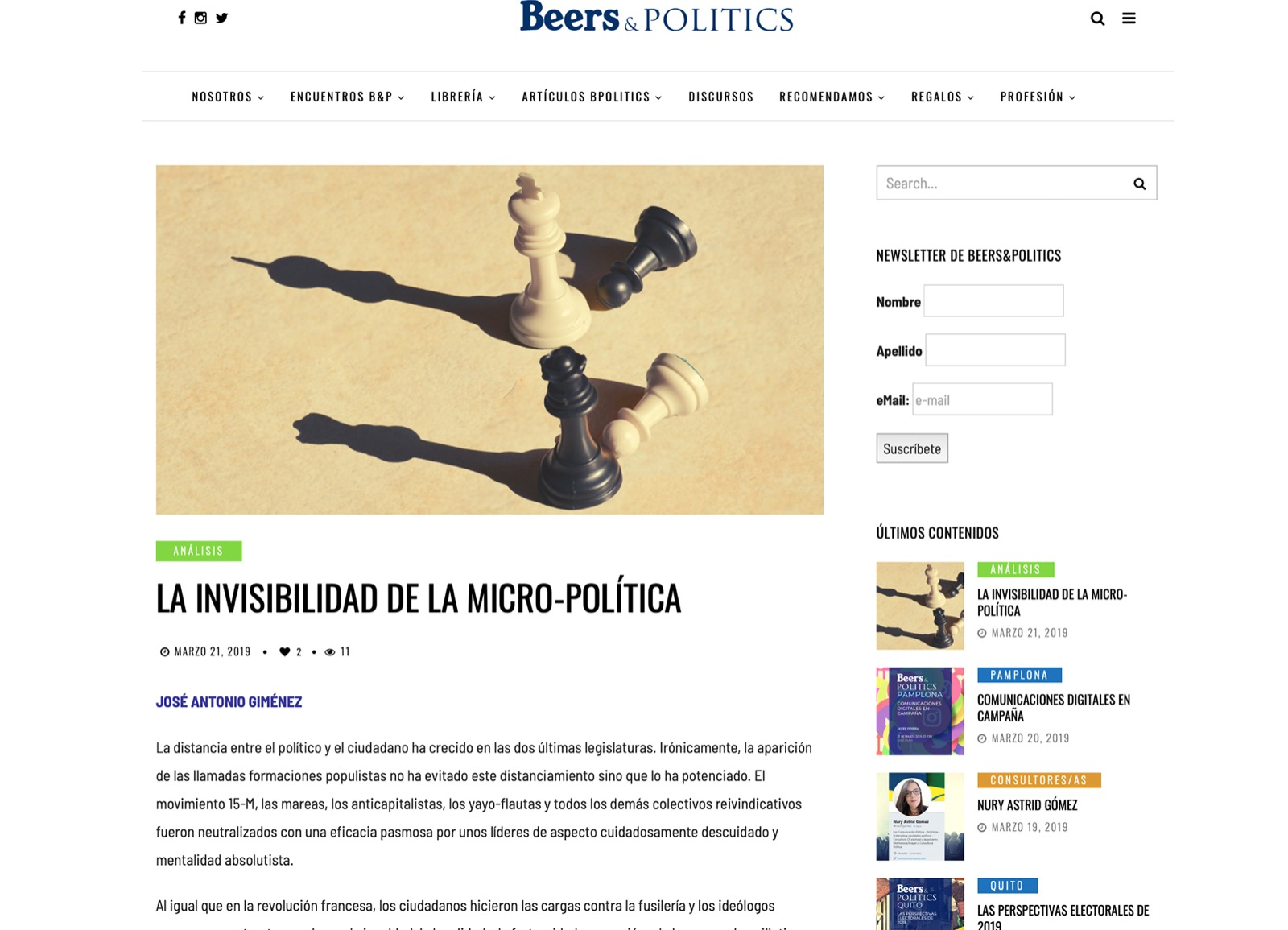 23 Mar The invisibility of micro-politics

Posted at 10:49h in communication, Uncategorized by jagf

The distance between the politician and the citizen has increased in the two last terms. Ironically, the appearance of the so-called populist formations hasn’t hindered this aloofness but enhanced it. The 15-M movement, the tides, the anti-capitalists, the seething seniors, and the rest of the activist groups were neutralized with an astonishing efficacy by leaders who had a scruffy appearance and an absolutist mindset.

Like in the French revolution, the citizens opposed the gunfire and ideologists created a structure in which equality, legality, and fraternity consumed in the bonfire or in the guillotine the lives of romantic revolutionaries and brought to trial and to the legislative assembly those who longed for power more than anything, controlling Les Gazettes and the political police. If you prefer to update it to modern language you can replace it for public media and CNI, setting aside the differences of the period.

That political magma, in which stabs in the back are a daily occurrence, has little to do with the citizen’s real problems. It looks like the ways of the highly criticized traditional politics are a contagious virus.

Issues like the deterioration of children’s play areas in the parks brought about by uncontrolled street drinking or the lack of maintenance, insufficient night lightning of a given street, or the systematic oversight of pruning… are nonexistent problems for modern and tieless politicians, they were for the traditional ones who wore ties as well, by the way, but that affect directly citizens’ living standards.

It is in this political stratum where and citizens with real vocation for public service, being unpaid and having no prebends, spend their free time trying to improve small things. Anonymous citizens whose names won’t be present neither in the table where electoral rolls are negotiated, nor in the distribution of job positions as consultants, even though they’re the ones who best know the firmness of the neighborhood and merchant associations, the problems their urban environment faces and the reality of their streets.

They’re the ones who trudge their district to see what can be improved. They’re the ones who are up to the job with regards to actual democracy. These soldiers of micro-politics will never be represented in the local administration’s chess board, least of all in the regional or national one.

And however, they’re the first ones to be sacrificed in place of those who have occupied the places in what is now known as party structure, just like what happens to the pawns, to the ones who are unaware of the basic rules of traditional chess.

It is a pity that the politicians who came to regenerate the system forget that a pawn’s movement is essential to establish a game plan and an effective strategy. That the development of the game will depend on the opening move. And they, with their short moves and always forward, give you the advantage of position.

In these elections, we will see again how politics’ pawns are forgotten to give way to familiar faces with an uncertain future, uneducated management ability, and a short if not nonexistent, political trajectory. Backed, that’s true, by their name and professionalism in other disciplines, be these elite sport, the culture, or the show business, and whose precursors, such as Niurka Montalvo or Tomás Reñones, haven’t been very good. It’d be nice if more politicians played chess, the real one.