How many seats can a television debate grant?
8402
post-template-default,single,single-post,postid-8402,single-format-standard,theme-bridge,bridge-core-2.2.9,woocommerce-no-js,ajax_fade,page_not_loaded,,qode_grid_1300,vss_responsive_adv,vss_width_768,footer_responsive_adv,hide_top_bar_on_mobile_header,qode-content-sidebar-responsive,columns-3,qode-product-single-tabs-on-bottom,qode-theme-ver-21.6,qode-theme-bridge,wpb-js-composer js-comp-ver-5.0.1,vc_responsive

How many seats can a television debate grant? 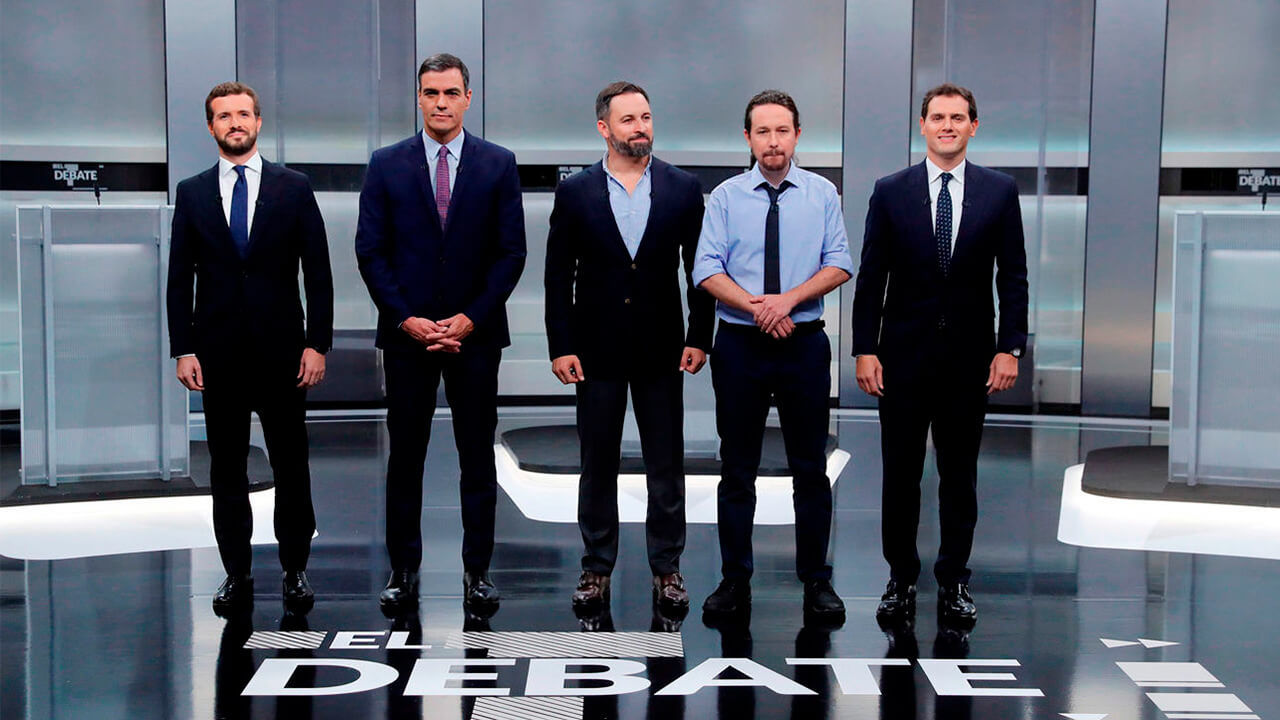 02 Nov How many seats can a television debate grant?

Posted at 13:16h in communication, Uncategorized by jagf

This is what everybody wonders but nobody has an answer to. However, most political parties have burden the responsibility of their campaigns on it, or them, depending if we talk about the debate of the heads of the list, or the other debates that will come with this one, the days before and after it.

The reality is that nobody wanted this campaign, except for PSOE, because the finances of the parties are in the red. Including the socialists’ ones, but they have the option of using La Moncloa, the mass media and the government’s press conferences to promote their party, sending their electoral message between the lines.

In fact, nobody is puzzled by the fact that the Central Electoral Commission has initiated a sanction proceeding to the caretaker president, Pedro Sánchez, because of his electioneering use of the facilities of La Moncloa to do an interview – as PSOE’s candidate – with La Sexta due to Franco’s exhumation. Nor by proceeding against the spokeswoman minister, Isabel Celá, because of the electioneering use of the press conference of the Council of Ministers, in which instead of informing she decided to value – not analyse – the achievements made by the government.

PSOE’s premeditation is demonstrated in the fact that its indignation is based on announcing that they will present allegations to avoid the fine, knowing that being sanctioned or not, the work was already done, which is what mattered to them. Welcome fine – an unprecedented feat in the Spanish democracy – if brings with it their election, because in order to be re-elected you need to win the elections and become president, and that has not happened.

Let us not dilute, let us focus on the main issue. How many seats does a debate grant? According to several brainy studies, debates, including the historical which have served as paradigm, case of Nixon-Kennedy, barely alter the vote in a 6% of the electorate. As the proverb states “All mouth and no trousers”.

However, what several studies say is that debates reinforce political tendencies of the audience, due to the fact that people watch them with a lot of prejudices against their own tendencies and political affinities, and there is no change in the vote despite of their candidate’s loss of the debate. Therefore debates are a kind of collective meeting.

Consequently, Pedro Sanchez’s political strategy has been – and is – what has historically given more positive results; establishing a groundswell of opinion, underpinned by a CIS survey prepared ad hoc, in which VOX soars – feared extreme right – and the parties that will add points to the left or right are weakened – Unidas Podemos and Ciudadanos -, with the aim of forcing the opposition – embodied by PP – to an abstention, as long as he does not make any mistake in the campaign, and particularly in the debate. This is an optimum scenario to Pedro Sánchez who does not feel comfortable in political debates and who is the one that has more to lose, although this loss is actually insignificant. 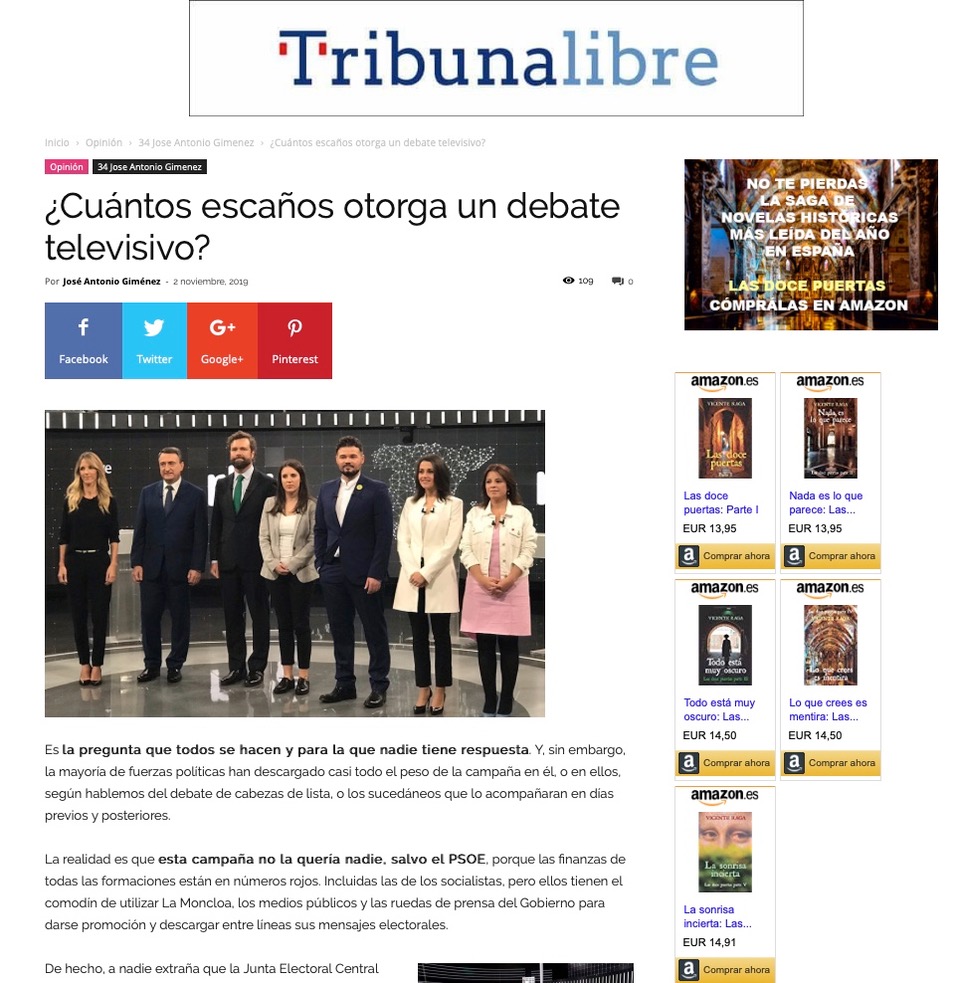 Let us not forget that debates influence floating voters and, in fact, some investigations say that electoral debates have more effects when there is more competition in the elections, which is the current scenario. Hence the bias of the CIS survey which presents a different scenery to the tendencies shown by the electorate in the past few days, which aim at a technical draw between the two traditional forces, and a balance in the % of votes of the three newest parties, fighting for the third position.

Then, how is it that some parties such as Unidas Podemos and Ciudadanos base all their campaigns on the debate and social networks? To the best of our knowledge, in the historical series of the presidential campaigns in the UUEE, debates tend to reinforce the intention of vote to those already compromised, and the number of citizens that change their intention of vote due to the debate has been estimated between the 1 and 4%.There is little margin with these percentages.

Perhaps, this explains why there are candidates who win the debates and, however, lose the elections. This is the case of Rivera and Iglesias in the last elections. A mistake in the approach which has been repeated in this elections, the ones in which the two best speakers can savour the sweet aftertaste of their triumph in TV, but are left with the sour aftertaste of seeing how the traditional parties are still ahead.

In an express campaign as the current one, what is actually important for a candidate is not winning the debate, but the strategic battle of the campaign as a whole, and here PSOE has an edge over. Only the succession of critical points in the decisive week; candidates’ debate, spokespeople’s debate, unemployment data and violence in the streets can provoke an imbalance big enough to turn surveys around.

The only certainty so far is that the candidate who pretends winning the debate has to know that those who has to convince are neither the moderator nor the adversary nor the public, but to base on reinforcing the support of its voters and attracting part of the audience which is willing to be convinced: previous voters, abstainers, electors disappointed with their opponents… and perhaps they are the parties that tilt to the centre, starting with Ciudadanos, the ones that can catch up more.

A word of warning for all seafarers: among abstainers and floating voters, almost 45% of electorate has not decided their vote and has still doubts of their election just 10 days before the night of the elections. Do not take for granted any option because the political spectrum leaves room for all type of surprises.