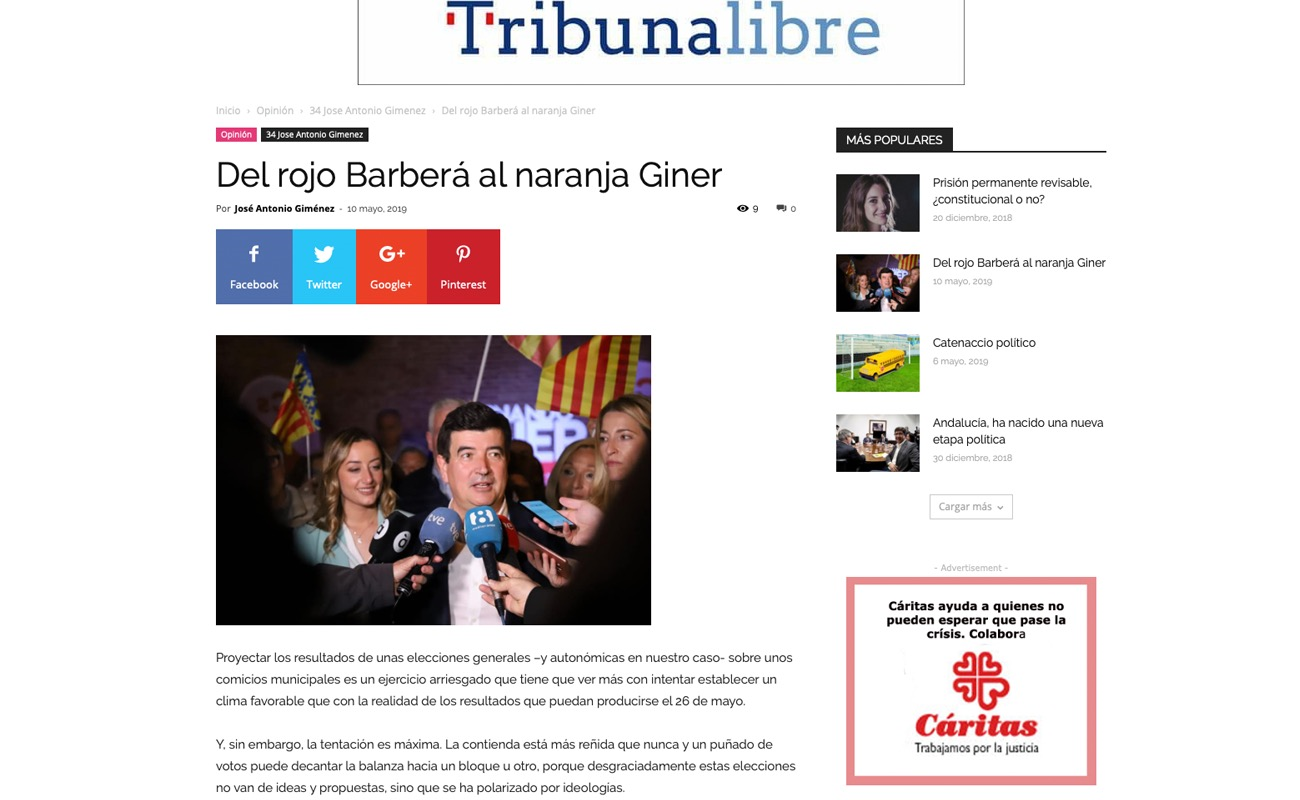 Posted at 08:43h in Uncategorized by jagf

Attempting to project national and regional election results onto municipal elections is a risky practice that looks for setting a favourable atmosphere more than considering real possible results on May 26.

Despite knowing this, it is still an incredibly tempting practice. The battle is tighter than ever and just a handful of votes could tip the scales in favour of one wing or the other, since unfortunately these elections are not about ideas and projects, but rather are polarised in terms of ideology.

When looking at the last regional election results, they predict a turn to the miscalled right wing under Ciudadanos’ leading. The orange formation headed by Fernando Giner would have one councillor more than in the last term and, according to election results from a couple of weeks ago, they would achieve a “sorpasso” (overtaking) of the PP (Partido Popular, People’s Party in English) in Valencia. And maybe in the other two provincial capitals as well, but that is a different story.

Not the preferred scenario for PP’s María José Català, whose discourse tries to emulate great Rita Barberá (PP), the only one who proved polls at the time wrong, those that anticipated that regionalists would be the most voted centre-right force. One councillor tipped the line of electoral success, and it was also one councillor what gave PP-UV outright majority. Almost the same scenario today, but with swapped positions: predictions give Català a historic low -around 18.7% of votes and only six councillors. Yet still the sum of Ciudadanos with PP’s support and presumably four Vox councillors would win by the minimum and give the mayoralty to the centre-right.

Of course, however, this analysis is just but a mere projection of the past onto the present and doesn’t take into account an essential factor for municipal elections: the candidates’ image and closeness to voters. In this type of elections, the candidate as an individual is actually taken into consideration; that is, their empathy, image and the extent to which their professional career is known. And, undoubtably, direct effects of the proposed agenda on the streets and the citizen are also looked at. Here these effects are tangible, whereas in national and regional elections, although these factors have a certain influence, people’s votes are mostly based on the brand -the party and acronym- or the person who embodies it, whoever that be -Sánchez, Casado, Iglesias, Abascal or Rivera and Arrimadas.

It is in Valencia where we see the battle between Català (PP), her candidature stained by her formation’s results and corruption in the municipal council; Ribó (Compromís), a mayor whose image has suffered more than expected due to his urban management, conflicts with the Junta Central Fallera (Central Fallas Committee) and his lack of tact with local tradition; and Giner (Ciudadanos), candidate with little political background and with experience in private management, but who needs more face-to-face contact with citizens so that possible voters can put a face to his name.

Along with them we have two unknown candidates: Gómez (PSPV), young and smiley candidate who feels protected by current national president and in a favourable situation, but who we are unsure whether will be able to navigate the strong currents of real politics; and Gosálbez (Vox), candidate that has to face previous electoral hangover when harsh reality diminished the endless hope of many of their voters who thought crowded rallies equal winning elections in the 21st century.

You must be wondering what is with Podem (Oliver) then. Same as their older brother, they have become irrelevant. They may have resisted during regional elections for their national image, but now predictions of phagocytosis to Compromís’ benefit leave them out of the game.

Three decades later, Sandra Gómez and PSPV still reclaim their red colour for the city of Valencia. Ever since Rita Barberá’s victory in 1991, PSPV socialists have been unable to present an alternative that makes effective competition to PP, and only one councillor tipped the scales in favour of Joan Ribó (Compromís), the mayor’s bête noire in 2015.

For that reason, my money is on the colour orange for these elections. Fernando Giner will rise higher than what predictions have indicated and he will do so to the PSPV’s detriment, and not PP and Vox’s, which cannibalise each other, the former being in an advantageous position derived from a counter-response to PSPV national and regional results.

Citizens seem for once to be aware of the fact that Spain’s third capital needs an economic revival and to be brought back to the international scene. Fernando Giner seems to be the most sensible option for this path, taking proposals and measures that his formation has launched this last four years as the opposition into account.

We may not see results like Rita Barberá’s in 2007, when she beat all records and her list obtain support from 56.67% of voters, outright majority that provided her with 21 councillors out of 33. However, if Giner meets expectations and reaches mayoralty with results that give him enough leeway, we could inaugurate the “orange period” in Valencia. Mind you, though, that the left has imposed itself in 13 out of 19 districts in the city. Additionally, the same PSPV that hit rock bottom last elections and didn’t win in any district, recovers five now (four and one to Compromís’ and PP’s detriment respectively). This is no la vie en rose -or orange- for anyone.