Sanserif Creatius will fill the city of Valencia with cardboard as a future alternative for the habitat
9831
post-template-default,single,single-post,postid-9831,single-format-standard,theme-bridge,bridge-core-2.2.9,woocommerce-no-js,ajax_fade,page_not_loaded,,qode_grid_1300,vss_responsive_adv,vss_width_768,footer_responsive_adv,hide_top_bar_on_mobile_header,qode-content-sidebar-responsive,columns-3,qode-product-single-tabs-on-bottom,qode-theme-ver-21.6,qode-theme-bridge,wpb-js-composer js-comp-ver-5.0.1,vc_responsive

The city of Valencia will be filled with corrugated cardboard to demonstrate that there are viable and efficient alternative materials for renewing the current concept of habitat, a proposal by the Valencian design team Sanserif Creatius that will invade various spaces and premises in the capital during the dates of the Feria Hábitat Valencia to present furniture, products and books developed with this material. 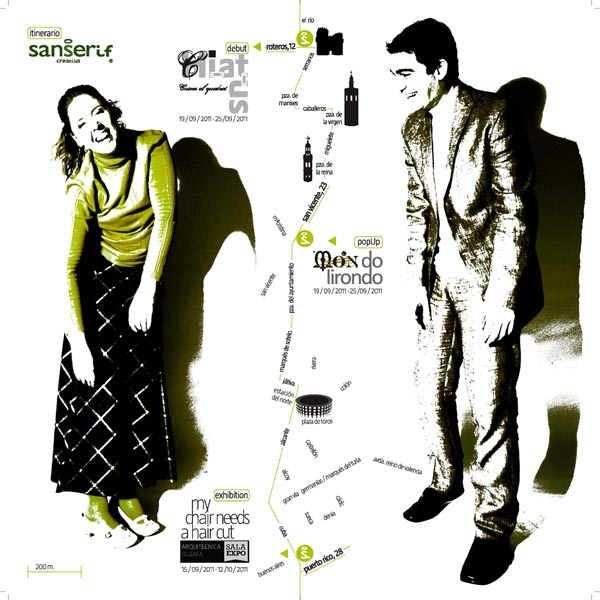 The project, which has been integrated into the actions linked to Valencia Disseny Week (VDW), will transform three spaces in the city ―two restaurant premises and a gallery― by means of interventions in which the pieces of corrugated constitute or are integrated into the space, according to the designer Ana Yago, director of the project.

In essence, the idea is to incorporate their pieces, from furniture to lamps and fashion accessories, so that visitors can see in situ the solidity and functionality of theses pieces, which are capable of providing the same features as pieces developed in more traditional materials but which, at the same time, are more environmentally friendly and contribute social, cultural and environmental values to the spaces that incorporate them.

To this end, Sanserif Creatius has developed an itinerary that crosses the city though these spaces from El Carmen, passing through Calle San Vicente to end up in the heart of the Ruzafa, specifically in Calle Puerto Rico, where the exhibition “My cHair needs a haircut” is located, which will bring together for the first time in Valencia a selection of exclusive furniture developed by this team of designers and the workers of the Special Employment Centre (CEE) of the APAI Foundation in San Sebastian de los Reyes (Madrid). 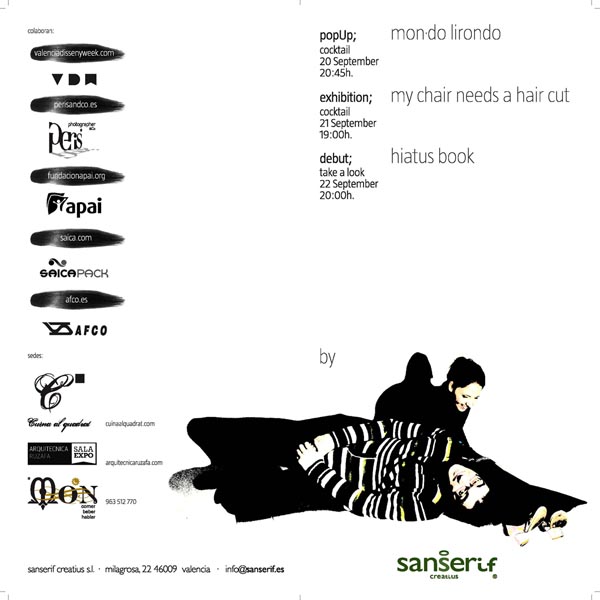 The idea is that visitors to the Fair can tour the spaces while at the same time getting to know some of Valencia’s landmark monuments or buildings, a kind of artistic-cultural tour sprinkled with cutting-edge design.

So, after a day at the Feria, you can start the tour from the very moment you get off the tram at the Estación de Madera. When you cross in front of the Torres de Serranos, Roteros street houses the first of theses interventions; Hiatus, in the restaurant Cuida al Quadrat (Roteros, 12), which houses some of the best-known pieces by Ana Yago and Sanserif Creatius.

In addition, the book Hiatus will also be presented there, a compilation of opinion articles by 20 of the leading figures in international design, from Jasper Morrison to Li Edelkoort, via Claret Serrahima or Samantha Sanella. Gastronomy and design united in the heart of the city.

In this space will be present the Bold seat, conceived for the interior design of the spy house of Big Brother 11; the mariAntonieta chest of drawers developed for the international exhibition Three little pigs; or the My screen wall projection delimiter, a decorative piece that determines the projection space of a video cannon or a Home Cinema without the need to resort to external or supplementary screens, among others.

The route continues in the direction of Plaza de Manises crossing Caballeros Street in the direction of Miguelete, which leads us to Plaza de la Reina the starting point that leads us to San Vicente Street, where an electric gastronomic space has just opened; Món. In the building that once housed the headquarters of the Círculo de Bellas Artes (Fine Arts Circle). Here, in addition to sampling a carefully selected range of international cuisine or enjoying a nightcap, you will find Món do Lirondo Pop-up exhibition, a new stop where you can relax with an audiovisual showroom in which the models are shown in the nude. Images that mix the warmth of the body with the natural textures of the furniture designed by Sanserif Creatius.

And from there, the route crosses the Plaza del Ayuntamiento, Marqués de Sotelo, towards the Plaza de Toros, heading towards Alicante Street in the direction of Ruzafa which we access via Cuba Street to reach Puerto Rico Street, number 28, the headquarters of the Galería Arquitécnica Ruzafa, the last appointment proposed by Snaserif Creatius. Or first if you enter the city via the AVE high-speed train.

This exhibition project, coordinated by the designers Ana Yago, has been configured as a contemporary multi-space developed entirely with furniture and complements made from 100% recyclable corrugated cardboard, some of them covered in hair, hand-assembled in CEEs. The exhibition brings together sofas, footrests, lighting, and decorative armchairs, complemented by bags and specialised book on art and design made from ecological paper and cardboard, with the aim of demonstrating that it is possible to be responsible and respectful of the environment without renouncing aesthetics and exclusivity.

The project has the essential collaboration of the Spanish Association of Corrugated Cardboard Packaging Manufacturers (Afco), the company Saica Pack, the Apai Foundation, the different headquarters and Sanserif Creatius.