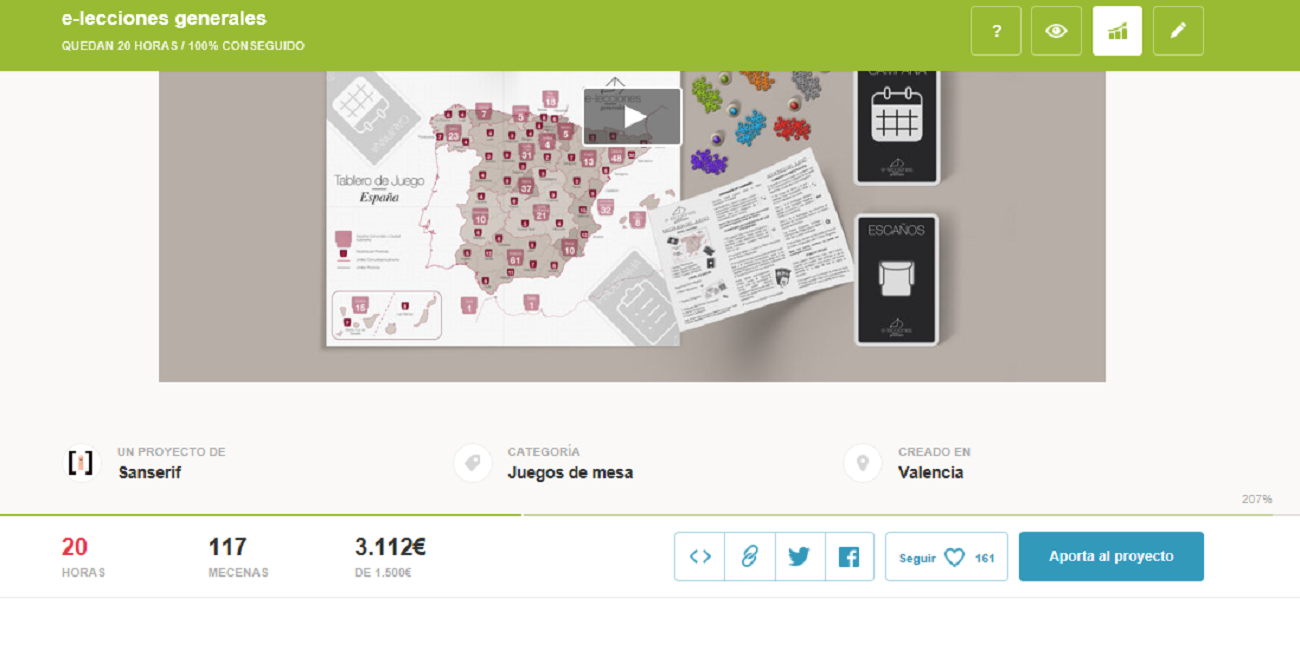 Posted at 09:53h in communication by jagf

The boardgame e-lecciones generales created by valencian entrepreneurs to teach the seat distribution in Spain and the necessity of dialogue in politics finishes successfully its crowfunding campaign, meeting 220% of funding, what will make possible its edition and distribution in schools and recreational associations of boardgames.

This project, which started as a non-profit initiative, aims to be a contact point between primary and secondary students with the mechanics of electoral campaigns and pacts, as well as with the seat distribution in the Deputies Congress.

The boardgame is base on the educational philosophy of gamification of the learning process, that is to say, the use of recreational games in non-playful environments in order to potentiate concentration, effort and other positive values common to games among students.

The intention of its creators- designer Ana Yago and political marketing analyst, José Antonio Giménez – is to engage again citizens with politics in this long stretch situation of electoral processes and the boredom reflected in the elections, which is translated into nearly 29% of the population not voting in the last elections, similar amount of the one obtained by the party with more seats in the congress.

It is necessary to explain students – and citizens in general- how seats are distributed among the different electoral constituencies, as well as the importance of negotiation in order to govern a country, in a political situation in which votes’ fragmentation and the increasing political options to choose present as a more likely scenario coalition governments, according to political marketing analyst and co-creator of the game, José  Antonio Giménez

Accordingly, e-lecciones generales has been conceived as a recreational option to give the essential information to understand how electoral campaigns work, which mechanisms are used to draw the attention and gain votes, as well as to approach students to concepts such as debate, day of reflection, scrutiny, commission of inquiry, or the need of post electoral pacts to reach the sufficient majority.

This boardgame tries to combine its adjustment to reality with boardgames’ playability, that is why there have been taken some licenses in its creation, which are explained in the document attached. All in all, the game has had the support of 120 patronages in Spain, doubling the initial expected funding, which will make this initiative happen and which will be given a special edition of e-lecciones generales.