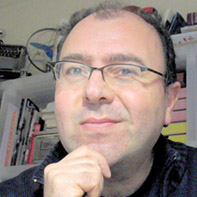 On a street corner in the El Carmen district in Valencia, where calle Ripalda crossed with calle Alta, seven bold forthright letters stand out, telling us that that if we find ourselves in danger, we had a refugio, or shelter. This sign for an air-raid shelter can be seen repeated in several streets of Valencia, particularly in the old town.

The evocative power of the word, the characteristic avant-garde design of its composition, the smell of bombs and pain in black and white mixed with the “epics” of the Civil War and of the Republic, instil this sign with a unique expressiveness. A sign reminiscent of the “Ideales” cigarettes pack (also designed in 1936) or acknowledging the influence of Russian Constructivism or the Bauhaus…

Believing that it had never been photographed, I decided to immortalise a sign that was perfect to illustrate something I wanted to say: Unión tipográfica, in calle Castelló. When I arrived at the place, armed with my camera, to digitise it with my compact-flash, I could only record its shadow, for it lay beneath the impersonal sign of a wholesale store.

I am convinced that, when in an ancient history museum, a future researcher from, let’s say the mid 26th century, finds a reference to this essay and has a look at its photographs, he will avail of additional information that will help him in understanding something about a local society such as ours.

If only we could have some information about the signs announcing the stores or public places of, for instance, the vibrant Valencia from the 15th or 16th century, although one would imagine that, given the prevailing illiteracy of the time, the value of the icons indicating the function of a tailor’s, a barber shop or an inn would privilege characters more related with calligraphic signage than with typography.

TYPOGRAPHY AND/OR CALLIGRAPHY. For that is another of the questions that begs an answer: can commercial signs be included in what we call typography? The academic denomination of the term (the art and technique of printing) does not cover either that possibility or that of “design”, commonly accepted by designers and consumers alike. But if we understand typography as the discipline trying to combine the functional aspects of the characters with their communicational and aesthetic purpose, then the value of signs (that should be legible and communicationally effective and also aesthetically pleasant) becomes particularly relevant.

Certainly, one can establish an initial differentiation between signs: between those signs that, by dint of their forms, are associated with the families of characters that exist in the Gutenberg or post-Gutenberg universe (at present, computer sign-writing has turned this type of sign into the most abundant), and those with a clear calligraphic and ornamental vocation and which account for the majority in our urban landscape.

Hence, if we were to look at those signs for texts composed in an orthodox manner, with Garamonds, Futuras, Frutiger or other families close to the work of designers and typographers, and on failing to find them, were to announce that that is not typography, we would be right just as we would be equally right in claiming that if they are characters intended to communicate something other than a mere textual reading and actually succeed in doing so, then they also deserve the honour of being considered typographically interesting. It is generally accepted that the term design has a rather confusing etymology, with some people claiming that it derives from Italian disegno (drawing), and others sustaining that comes from the word designare, to designate, name or indicate.

If we consider the technical procedures it requires, the trade of signwriting (currently verging on extinction if not already disappeared) was a profession closer to painting than to graphic arts. That is the reason why signs usually tend to ornamental calligraphy. It is no coincidence that the period when graphic arts appeared on walls (particularly in the 1920s and 1930s), was precisely when the characters used in the signs were more closely related to the typographic families printed in posters, basically in those with a geometric or “sans serif” orientation. All in all, what in recent times has been called “urban typography” is not restricted to commercial or administrative signs.

In Valencia (the same could be said for other cities, but let’s talk about here) there is a huge abundance of potential study cases regarding urban signwriting: the signs for streets and squares (a true chaos of designs and materials which is probably a good metaphor for our urban planning), numbers on doors, signs for blocks, insurance plates and even sewage covers are awaiting for someone courageous enough to study and catalogue them, and then share the results with society as a whole.