A shelving system that facilitates communication with our room mates or fellow workers is the new creation by Valencian designers Sanserif Creatius. Habla is a functional element that not only acts as a container, but is also “a transmitter of ideas and messages”, claims Ana Yago, the designer of the piece.

Formally speaking, Habla is a wall shelf with two possible arrangements, in which the strength of the concept based on adapting the speech bubble borrowed from comic books, opens up interaction with the space and its other users. 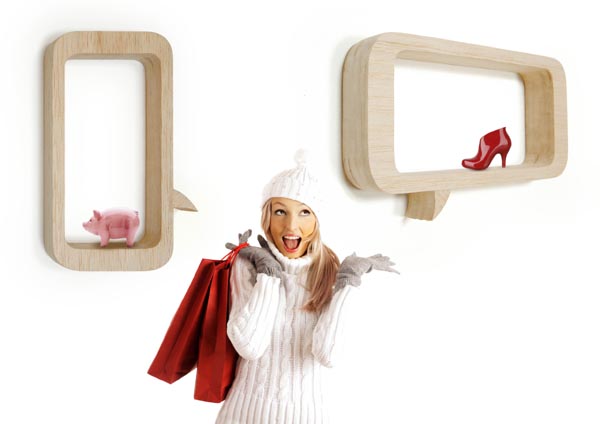 Habla borrows its inspiration from the speech bubbles used in cartoons, caricatures, graphic jokes, comic strips, etc., usually consisting of a round line coming out of the mouth or head of a person, representing their words or thoughts. This explains the curved forms in the corners of the shelf which, added to the lightness and the knowing nod to comics, open up the range of target clients by also appealing to children.

In fact, Habla has been conceived to hang from or be fixed to the wall, being completely integrated with the vertical surface thanks to the use of an invisible fixing system. In this way, it reinforces the sensation of a 2D vignette of the composition you wish to make.

Just as the speech bubble in a comic strip or graphic novel provides us with essential information that allows us to understand what is going on, or which reveals key details about the main character in the story, as Ana Yago explains, “Habla provides us with information on the space where it is located, on who lives there, underscoring an element or a series of them”.

One of the most noteworthy features of Habla is “its usefulness as an element of interrelation and/or communication between the various inhabitants of a space”, as José Antonio Giménez, Sanserif Creatius’s communication director, pointed out. In this way, any object placed in this shelf takes on the value of a message, communicates a feeling or specific information, while maintaining its aesthetic and functional values.

In this regard, Giménez explained that “placing an empty watering can could tell a room mate that the plants need watering when they get back home. Or, for example, placing a number of CDs or books next to the sound system or reading chair, tells us about the tastes of the people who live there.”

Interrelating with others. “Our way of being, of dressing, or speaking… everything says something about who we are. And this is true also of the spaces we live in and the furniture they contain”, according to Giménez, who insists that, whenever we buy a piece of furniture we do not take into account only its functionality, but also its “added values”, such as environmental concerns based on social integration or socialisation, which is to say, “our relationship with others and the surrounding in which we live.”

Habla is essentially a decorative container, but also a container of information, in which the aesthetics are given priority. Despite the obvious formal differences, it is like Ron Arad’s Worm bookshelf in that it demands a space of its own, while at once adapting to any contemporary space.