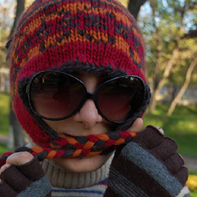 When talking about Armenian design nowadays, we must fist address its origins and Armenian culture in general.

Having a culture with a long history and many different eras, being situated between West and East, Armenia has always been influenced by both, and this is true not only for culture but also the geographical location and living conditions.

Over the ages Armenia has created its own symbols. Anyone visiting Armenia is impressed with its tasty fruits, its stony mountainous nature, its famous carpets, petroglyphs, its ruins, the Armenian alphabet, the letters of which are decorated with natural elements, etc. Thus, pomegranate, grapes, khachkars (the cross-stones, which are used as memorials and previously as gravestones. What’s interesting is that you never find two khachkars with the same ornamentation), Ararat mountain, colourful carpets, the colours of which are extracted from the natural inks (flowers, roots, rinds, minerals and even worms) and wine can be classified as Armenian national symbols. As a result many artists use those symbols to underscore Armenian arts.

The Soviet Union also played its own influence on Armenian national culture. I’d call it a time of simplicity. Industry and urban planning bloomed during these years but, as regards design, everything was very rectangular in shapes and the only colour was a monotonous pink. In any case, it is worth mentioning that seminal names in contemporary Armenian arts such as Martiros Saryan, Minas and Paradzhanov lived during the Soviet period.

Armenian web-design appeared more or less around the year 2000, but design in general always existed in different forms.

I could divide design in Armenia into a few different areas, such as fashion design, print design, architecture design and web design. All the mentioned industries are actually not that widespread, first of all because of the scale of Armenia itself. Therefore, you can only find a couple of fashion designers here, a couple of print design studios and so on. Either way, I am not talking about the quality as every well-educated and well-working Armenian designer has an absolutely unique style, and you would be hard-pressed to find any other similar hand. Another attribute is that we have a unique background: which is mostly our national culture; and we mostly work for foreign businesses. This is the result of the small size of the local clientele and business market. As such, there is absolutely no need to stress Armenian symbols, but to work with and for international market needs and standards. Of course, the Armenian mentality puts its own stamp on our work, but this gives an extra appeal to design made in Armenia.

A downside of design here is that some designers do not actually treat their business seriously enough to have a profound knowledge about what they do, but fortunately this is not extensible to them all. As a result, you cannot find many designers with a specialized library. Most people believe that you can find anything on the net and that there is no need to pay money for printed books. In my opinion, this is probably the greatest mistake among designers. It is still worth having a special budget for books. Anyway, I’d like to mention some of my colleagues who are contributing a lot to Armenian design: Ara Aslanyan and David Margaryan (the founders of the well-known local brand “Zyablik”), Anush Smbatyan (probably the most unique hand I have ever seen) and some others.

Experience has also taught me not to forget about the usability of the website, and to work on functionality with colours and shapes. While designing a website, I put the stress on the tools, through which the client makes money. One of those aspects is playing with the user’s eyes so that he/she sequentially pays attention to the most important elements of the website, and that no unnecessary graphical element prevents the eyes from finding the things that are absolutely important. This is the simple scheme of commercial web design. To this end, you must be conversant with the basic structure of a page, which has been regulated according to the psychology of Net users.

For me, the aspects that make a page unique are the geometry, colour selection/matching and a special, appropriate extra in a website, that could be, for example, an ancient vase for a bank website design. This suggests associations and builds a special impression. Let’s try some idea combinations with the ancient vase and the bank. First of all, this means, we (the bank) are devoted to cultural values, we (the bank) are regular, we (the bank) appreciate human-made values, and probably the most important thing: you can trust us (the bank).

It’s very important for designers to train their logically thinking and analysis. Design is not only about creating a composition, it is also about psychology, mathematics, logic and whatever else that can help us make an impression. So, it is important to develop yourself in general, in all available subjects. Everything helps a designer to create a well-qualified product.

This is in short the semantics of design.