Designing a house often reflects the character of the inhabitants without speaking eloquently in details about them. The furniture we deck our house with actually reveals a great deal more about our personality than anything else. Borrowing this theoretical concept the Valencian designers of Sanserif Creatius has designed a new shelving system called Habla which actually more than as a furniture doles out as a communiqué for expressing feelings and personality. 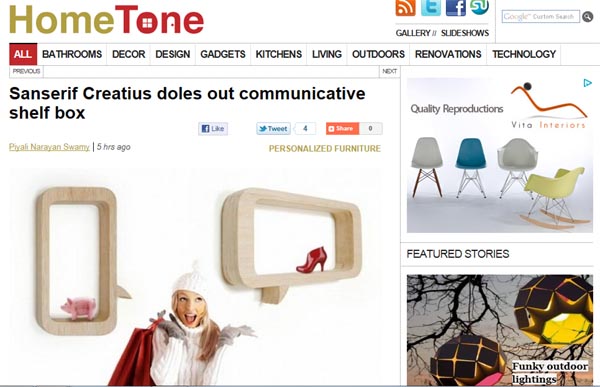 The Habla by Ana Yago of Sanserif Creatius is a functional modified wall shelf that also acts as an interface between house mates or fellow workers under one roof. Designed on the concepts of communication bubbles in comics and cartoon strips, it is a container that though fixed to a wall acts like an open dialog box. Yago opines that situated in a free space the shelf is a “transmitter of ideas and messages” with friends and family around. The idea is to just put down a self descriptive object on the projection to pass on the idea your room mate or fellow worker. The designer explains that as a stack of books over the night stand expresses the mood of the reader over the night exactly in the same way the shelf can be made to communicate a statement of persona through signs without articulating too much. For example, you can just leave a box of chocolates on it to express that the awaited good news, say of a promotion, has been delivered. Or, just leave the dusting cloth on it to tell your partner that it’s his turn to dust the house over the weekend.

Working as personalized furniture for your living area, Habla not just hems in your possessions but also reveals information about you, which is its extra appeal and a windfall gain you will hardly be able to resist adding to your space.