Alberto Lievore: Voices in the studio 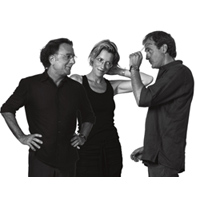 We have made projects in many diverse fields, but no object reflects the values of a subject better than those that shape his immediate environment.

He makes this choices at an unconscious and naïve level, beyond any social conditioning or demand. The subject bares himself in this intimate space.

It is for this reason, because we are interested in the subject, that we had placed such stock on the discourse proposed by household furnishings, because this is the space through whose forms the planners can actualise the most precious experience: that of communication, intimate and therefore true.

Far from the façade of the functional and the pressures of the market, the meeting of our values with those of another. This is the meaning of form.

Today design addresses more than the functionality and the aesthetics of objects. Technology, production engineering, the prefect understanding of the target market, its means of communication and distribution, among other factors, make design an interdisciplinary practise rather than a discrete field.

…and once we have accepted all of the above in all its consequences, our only choice is to devote ourselves entirely to the search of the form capable of synthesizing this complexity while meeting our wishes, just as an actor searches for the exact gesture that will tell all.

…The form in itself is not the ultimate end, it is just the vessel that will take us to it, but without the precise form, we will never reach that end…

The art project is free. The architectural project is relatively free, it only needs to meet the expectations of whoever commissioned it. The project for mass production will be judged before being acquired by thousands upon thousands of possible users. Design is subject to so many conditions that it feels like having to dance well with tied up feet.

We believe that judging a thing in itself is meaningless, it is in relation to someone or something that it acquires its meaning. But, for who? How? Where? It is here, in relationships, that we strive for an integrative approach: environment and architecture, architecture and furnishing, furnishing and object, subject and object. Rather than feeling like a hindrance, the preponderance of the environment is an exciting source of choice. Within it complementary elements fall into place and are amplified in their mutual interactions.

We approach the project in concentric circles, from the general to the particular, starting out with sensations, memories, impressions, fleeting notions that slowly take shape, a shape that pulls us in, that conditions and conquers us, the allure of the object is a mighty one. This is why it is crucial that we draw our original intentions. They will be our reference and our guide.

(Better to know where you are going but not how to get there, than knowing how to move but not where you’re headed)

The early sketches are idealised images, oneiric, desire in its purest form. Thus, the process of development is one of constant compromise: between ergonomics and gesture, technology and lightness… between desire and the principle of reality.

The observer does not analyse the object, he perceives it in its totality. For this reason, the objective of composing the different parts of the piece is to achieve a harmonic whole.

Harmony… is when the happy union of various parts reaches beauty and Beauty is the quality possessed by some things, which makes us fall in love with them.

The synthesising effort develops from an unwillingness to renounce any of the desired attributes, even if some of them appear to be incompatible. Most of the time, greater challenges bring out the most ingenuity.

We are convinced that since the subject has an anthropocentric worldview, it assesses everything with adjectives relating to human beings: friendly, aggressive, solid, relaxed… , and that his choices are based on emotion. Based on this insight, we do not make what others want us to, but we propose what they might want.

In our work, aesthetics are not intended to convey any messages. They are just a means to share an experience.

We believe that the playful and the entertaining are emotional states, desirable ones, whose source is the subject. To attempt to place the responsibility for those to the object has the same deleterious effects as telling the same joke over and over.

The experience of pleasure is an important enough function that we ought to try and accomplish it. Imbuing objects with sensuality is as noble a goal as the effective fulfilment of a basic function.

Attracting attention is a natural and legitimate goal in a market society, but we do not believe the way to do it is by frantic gesticulation: the more universal and dignified means to achieve it is the loving gesture. If we had to establish the highest value in our work, it would be grace.

As the processes of design involve a permanent negotiation between form, function, construction, etcetera, the same is true of the workflow at the desks of the studio. In our team, the whole is not the sum of the individuals that compose it. It is the way they interact.

Just as one realises how fleeting words are when one is trying to tell a dream, when we start developing an idea we find how labile forms can be. The hundreds of models in our studio would be a better illustration of our search for that exact word.