A Plate that evokes the encounter between the sea and the shore
6787
post-template-default,single,single-post,postid-6787,single-format-standard,theme-bridge,bridge-core-2.2.9,woocommerce-no-js,ajax_fade,page_not_loaded,,qode_grid_1300,vss_responsive_adv,vss_width_768,footer_responsive_adv,hide_top_bar_on_mobile_header,qode-content-sidebar-responsive,columns-3,qode-product-single-tabs-on-bottom,qode-theme-ver-21.6,qode-theme-bridge,wpb-js-composer js-comp-ver-5.0.1,vc_responsive

Posted at 10:15h in Sin categorizar by jagf

The mellow rice with European eels, beetroot and dill of the chef of the RiFF restaurant, Bern H. Knöller, is the cornerstone on which the Valencian designers Sanserif Creatius have conceived Ufer, a plate made of craft glass that evokes the encounter between the sea and the shore, conceived to present a recipe with local scent. A unique piece that is part of the exhibition Design to the plate, that is held until the next month of March in the “Sala Estudi General” (General Study Room) of “La Nau” (The Ship).

Ufer –shore in German- is an eccentric plate, made with a piece of glass of great purity destined to jewellery, and the wings of which are used as a canvas to cover the culinary creation that it holds, at the same time that they recreate that dim and ethereal space impregnated with foam and salt from the Mediterranean coast, as the designer and director of Sanserif Creatius, Ana Yago, has explained.

In fact, in this plate, the inclination of the basin allows the disposition of the gastronomic proposal not to be altered and, at the same time, plays with that sensation of shore, a limit between the imagination of the plate and the space that holds it. Thus, a new visual effect is created but, above all, the consumer pick up even the last portion with no effort, as the main objective of the design is to improve the functionality of the object, in the words of Ana Yago. A minimalist plate that does not expect to decorate but to extol the content. 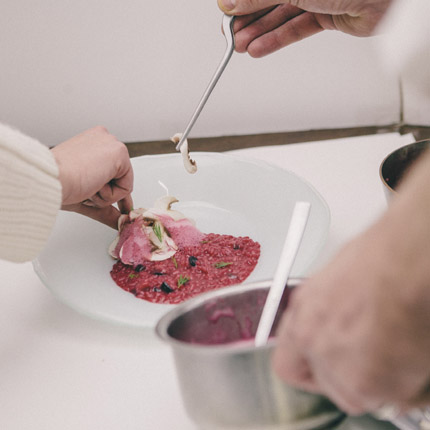 In addition, and to reinforce the popularity of the piece, this has been made with a piece of glass that is born in the heart of Villena, and that goes all over our geography to flow into the Mediterranean sea, as the designer has pointed out, who has collaborated in this occasion with the glazier Sara Sorribes.

Ufer is part of a selection of 14 recipients conceived specifically for the occasion by creators of the Association of Designers of the Valencian Community (ADCV) for many other unpublished culinary creations of highly regarded chefs established in our autonomy, case of Vicente Patiño, Alejandro del Toro and Bernd H. Knöller himself, amongst others, and that have been produced by craftsmen of the Craftsmanship Centre of the Valencian Community.

Charitable purpose. The exhibition Design to the plate is part of the cultural events organized by the ADCV and the Valencia Disseny Week that are parallel to the Habitat Fair, and counts on the collaboration of the University of Valencia (UV-EG), the Craftsmanship Centre of the Valencian Community, the Technology Lab of Food of the Polytechnic University of Valencia (UPV), the gastronomic association “A-cuinar” and “Nos Vemos” in Valencia.

The objective is to show the ability of Valencian design and its presence in a thriving sector as the gastronomic, with proposals towards the improvement of the experience of the client that wants to taste a traditional meal or a reinterpretation of it carried out by the large number of representatives of haute cuisine that are present in our area. And, also, it is an event with a charitable aspect, as every creation of this project will be auctioned publicly and the raised funds will be destined to the Bank of Food of Valencia.