MyScreen, the latest design for contemporary spaces from the Sanserif Creatius design studio, is a decorative picture frame that defines the limits when projecting images or photos on the wall. “MyScreen recreates the corners of a virtual screen and ensures that the space we use for projections on a wall or another surface at home or in the office are clearly demarcated”, explained the designer Ana Yago. 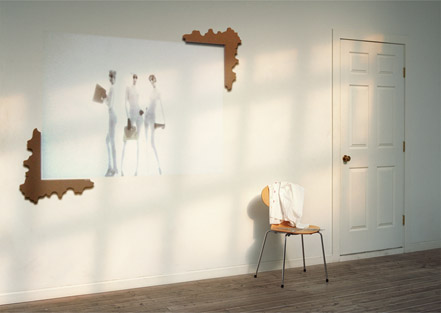 This new product is conceived to resolve a nascent need in contemporary spaces, where tube TVs and even flat screen plasma or LCD screens are giving way to Home Cinema. Using a video projector on a vertical surface is an increasingly more popular system for viewing images and audiovisuals.

This system allows us to choose the size of projection we want and “avail of a format four times bigger than the standard screen”, Ana Yago pointed out before going on to say that “MyScreen fulfils a need to decorate the empty vertical space chosen for the projection”, at the same time stopping this space from being invaded by clutter. In this regard, MyScreen is made with a single die-cut in the shape of a bracket or the corner of a picture frame with various different graphic and formal features. To make it easy to use, and to ensure spatial clarity, is comes in two units, which are to be situated on the diagonal corners of the space allotted for the projection, thus perfectly defining the virtual screen.

According to Ana Yago, MyScreen stops the space set aside for projection from being invaded by elements that do not fit in with the furniture and decoration chosen for the home, or which hamper the functionality of a working space. While not in use, a projection screen affects the aesthetic of the room in which it is located, even when it is folded away in the wall or ceiling.

And, as an example, the director of Sanserif Creatius claimed that a standard projection screen measures 200 by 180 cm, not to mention additional elements, supports and installation requirements.

In point of fact, Ana Yago says that one of the main problems in accommodating projections on a standard screen is due to the various formats—4:3, 16:9, etc.—which means that very often the surface is never used 100%, leaving blank spaces, sometimes white—on completely white screens—or sometimes black.

On another note, MyScreen has additional merits, as it can also be used as an occasional container or shelf, providing a temporary holder for the remote control or chosen projection materials, and, unlike a standard screen, does not run the risk of being damaged as a consequence of handling, such as scratches and tears on the bottom corners due to the counterweight.