Posted at 08:59h in making off, Sin categorizar by jagf 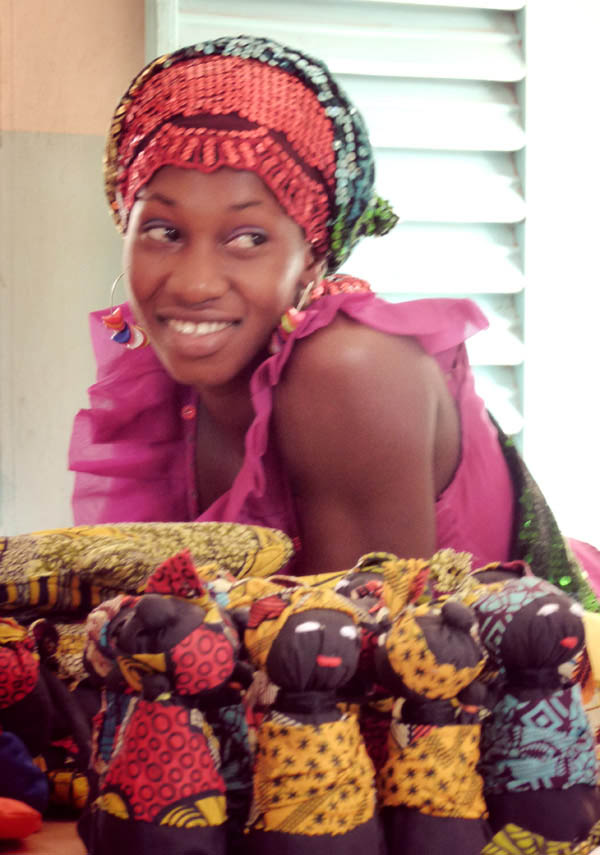 A collection of dolls made from cloth remnants and plastic bottles is the last creation by the Valencian designers Sanserif Creatius, a design that will swell the catalogue of pieces developed for the project Free Design Bank, which main objective is to promote the economic independence of African women.

Dystopian Doll is a doll devised to be made with the typical fabric of the territory and arranged to remind to the traditional patterns and clothing of Kolda, the Senegal region of Casamance, where Free Design Bank works with groups of women from disadvantaged ethnic groups by teaching them about sewing, costume jewellery and recycling. 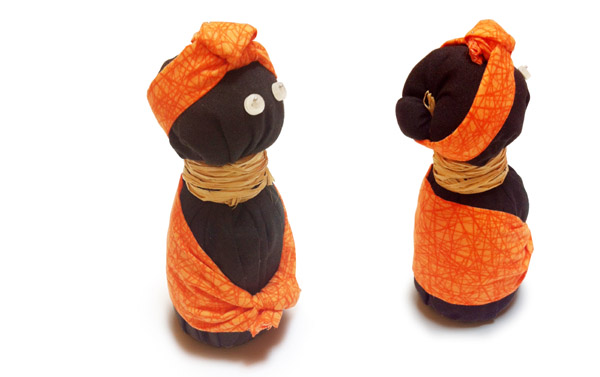 That is why the collection Dystopian Doll by Sanserif Creatius is based on the recycling of materials that are available in these areas, like plastic bottles, fabric remnants and sewing materials (buttons, thread, cord…), in order to get a low cost product, ecologic and handmade that can be distributed through fair trade shops and, thus, get funds to improve the situation of the women from the region who, in addition to their extreme vulnerability, suffer from social, political and economic exclusion.

The creative director of Sanserif, Ana Yago, has pointed out that the aim of this doll is, beyond its commercialization as a souvenir or gift that swells the catalogue of the different initiatives by Free Design Bank, also an item to denounce the situation of most of the women living in those communities.

Copyright free designs. That is the reason why the concept of dystopia was chosen as the referent of the collection, as it is a social tendency present in philosophy, art and culture used as a warning, or satire, that shows our nowadays tendencies extrapolated to apocalyptic endings.

In this sense, Ana Yago has explained that this concept started as a warning of the dangers of the evolution of liberal democracies to totalitarian societies, consumerism and isolation, and is now used as a contemporary concept used to criticise the presumed control of the great capitalist multinationals.

The name of the collection, Dystopian Doll, follows that denouncing tendency and highlights the dystopia affecting most of the African continent, the birthplace of our civilization, inexhaustible source of natural resources and minerals, that is now fighting for its survival in a polarized world. “A piece made of natural and recycled materials in a society where there is only place for utopia”, quoting the director of Sanserif Creatius.

According to Ana Yago, this collection of dolls talks about the world where we live and the utopia of changing it through design and craftsmanship. Thanks to projects like Free Design Bank, industrial design has turned into an important means to improve and develop the work of artisans in the weakest economies of world. Thus, the copyright free designs given by professionals and students have made possible to optimize the manufacturing and commercialization processes of these communities in order to be competitive in the Northern countries, within the context of Fair Trade.

Free Design Bank is an online cooperation project developed in the University CEU-Cardenal Herrera of Valencia (CEU-UCH), under the direction of Manuel Bañó, that has allowed artisans from Peru, India, Philippines, Sri-Lanka, Ecuador, Colombia, Tanzania, Cuba, Mali and Kenya to improve their industrial situation, always in the Fair Trade context, that guarantees fair salaries in decent working conditions, including equality for men and women and excluding the use of fair labour, among other premises.

This project, supported by Santander Group and Gumersindo Rodriguez Association, is a continuation of the actions initiated in 1998 by Design for a Real World, supported by different NGOs specialised in the promotion of Fair Trade, like Intermon-Oxfam, la Xarxa de Consum Solidari, Sodepau, El puente o Altromercato, among others. This initiative has been awarded with the Angel Herrera Award for Solidarity, by the Foundation San Pablo CEU, in the years 2000-2004, and also de UCH-CEU Chair in Solidarity, in the 2002 and 2003 editions.