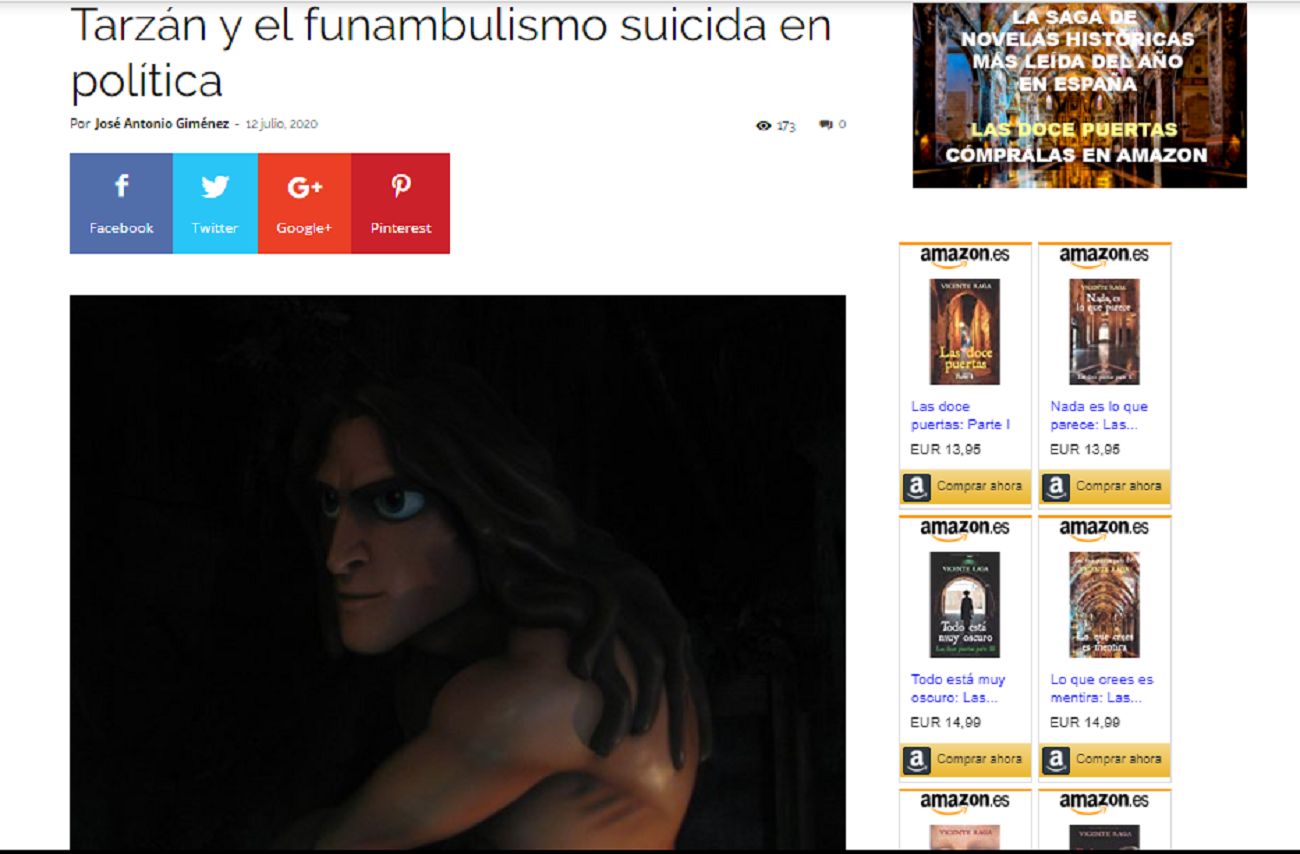 Posted at 15:17h in Communication by jagf

There are politicians, they still call themselves such, although many of us would define them as parasites, who have made of suicidal tightrope walking a philosophy of life. They are specialists in walking along the thin wire of truth, their truth, without caring who is to follow them for it. Something like what happened in Tarzan’s black and white films, where when they passed a cliff and an African fell, they cussed over the loss of the load, but not the carrier. And nobody seemed to be bothered by that.

This numbing of the social sensitivity is now stirring up our guts and we find it despicable, but it is still happening in today’s television, with digital images and full color. We see these political surrogates gesture and put on a facial expression of saying important things, we read the out-of-context highlights at the bottom part of the screen, but we don’t seem to hear what they are actually saying. They go on their way, no matter what happens to those behind them.

Sometimes, I like to think that it’s just a simple technical problem. The trend of manufacturing more and more flatter screens is reducing the size of TV speakers to a minimum, making it impossible to mount conventional drivers of acceptable dimensions. And that affects the sound quality. We can’t hear well. And they keep talking to themselves.

One could accuse others of being sexist and exercising the most despicable paternalistic behavior with a woman. One can accuse others of not respecting opponents and point an accusing finger and violent verbosity at them without having a single proof that justifies it. One can accuse others of misusing institutions for their benefit and against oneself, while at the same time being a member of the National Intelligence Center and lying in court. And what is really worrying is that, when the path of these political upstarts reaches a point where there is no escape, they rage and set off on a rampage against those behind them. All to hold on to their new life.

The campaign of some political parties with the emeritus king Juan Carlos I is not justified in the defence of the rights and equality of Spanish citizens, but in the morbidity of a story worthy of a gossip magazine, and in the need to cover up at all costs, and no matter who fails, the media attention of the lurid attitude of the current vice-president of the Government, Pablo Iglesias, with his former advisor Dina Bousselham, who has allegedly been involved in an extensive list of offenses ranging from the destruction of evidence to lies in court.

The morbid story of the king and the pseudo-German princess, together with the cheating on Sofía and Saudi money, have more media attention than the intrigues of a former university professor with the appearance of a messiah who was fond of relationships with younger ladies to whom he promised to marry—as they claim— until the ephemeral passion vanished along with his promises, like the aroma of a sardine sandwich vanishes. It was never good to compare champagne with sardines, even though I am more in favour of the latter.

Perhaps Pablo Iglesias believes that his somersaults on the tightrope will go unnoticed and that his dwindling supporters, according to the regional elections in Galicia and Basque Country, will keep him as their supreme leader. The frisky Bourbon pelvic region is only an excuse, as is attacking the king’s inviolability in Spain— valid for the emeritus, and the current one— in order to continue clinging to power.

Pablo is not a fool, although it seems so because of his statements against the women who have taken him up where he is. Eliminating the inviolability of the king obliges us to reform the Spanish Constitution. And this in turn, beyond obtaining the support of 2/3 of the Congress and the Senate, forces to conclude the legislature and to call elections. Anyone really believes that Sánchez or Iglesias would risk an election with what is happening with the deceased people and the management of the Covid in Spain.

It is one thing to put on a sorrowful face —Pedro Sánchez— and say that the information on the activities of the emeritus king “are shocking and disturbing” to “millions of Spaniards, myself included” —in the words of the President of the Government. And even to dare to make a moralistic statement claiming that “there is no impunity in our country” and that it is necessary “to review the public offices’ aforamiento”, something they have been opposed on several occasions, by the way.

And of course, we do not forget that in January 2019, following a positive report from the Council of State, Pedro Sánchez submitted to Congress a project to amend Articles 71.3 and 102.1 of the Constitution to limit the aforamiento, before the Chamber for Criminal Matters of the Supreme Court to offences committed by deputies and senators and members of the Government “in the practice of their duties”. Of course, surprisingly, it did not come to pass. Verbal intentions are one thing and real intentions are another.

And if we talk about royalty, the Spanish Constitution defends the inviolability of the king as Head of State. And this protects Juan Carlos I from all his acts committed before his abdication, in June 2014, from which moment on he was indeed brought before the Supreme Court. Or, what is the same, that the emeritus monarch could not be judged for the 100 million dollars from Saudi Arabia, whether or not it is for the AVE contract from Medina to Mecca.

Playing a tightrope walker leads to this. To lose your footing on one of those steps and see that there’s no safety net. Pablo Iglesias will be condemned. The emeritus king will be in the tabloids for his extramarital affairs unbecoming of a man of honor. And Pedro will not carry out a constitutional amendment because it’s one thing to say, it’s another to do. That is Pedro’s philosophy. Or do they have a high-tech television at home?